Welcome to EURACTIV’s AgriFood Brief, your weekly update on all things Agriculture & Food in the EU. You can subscribe here if you haven’t done so yet.

Apologies for a delay in our usual Friday newsletter – we took the decision to reflect on last week’s CAP negotiations before creating our podcast and newsletter. Hopefully we’re all more awake to enjoy it now!

This week: EURACTIV reflects on the final CAP down week, exploring why talks collapsed and negotiatiors did not manage to seal a deal, and we speak with Nathalie Sauze-Vandevyver, director in DG Agri in charge of quality, research & innovation, on promotional policy

The failure of negotiations on the reform of the EU’ Common Agriculture Policy (CAP) took no one by surprise. The decisive ‘Jumbo’ trilogue‘, aimed at reaching a ‘full package deal’ on the EU’s forthcoming farming subsidies programme, turned out to be a bust.

Four days of talks between the rotating EU presidency held by Portugal and the Parliament’s negotiators were not enough to find a compromise on the many outstanding points left on the table.

In our live blog, we brought you all the twists and turns in these behind-closed-doors talks as the negotiators’ positions became clearer and compromise proposals were offered up.

The act of reporting on the frenetic hours that led to the final no-go could be described in the words of the Colombian author and Nobel prize laureate Gabriel García Márquez.

In his masterpiece ‘Chronicle of a Death Foretold’, he portrayed the attempt of piecing together all the elements in a murder as a way “to put the broken mirror of memory back together from so many scattered shards.”

And that was exactly our main craft in these four days: putting together bits of fragmented information from the inside of the room in order to create a consistent and truthful picture of what was actually happening.

But the analogy with Márquez’s short novel also involves the outcome of the negotiations, as the failure of the CAP talks was as foretold as the death chronicled in the short novel.

Even though the main players were optimistic about sealing a deal at the negotiations kicked off last Tuesday (25 May), the number of outstanding points to sort out already seemed insurmountable.

As days went by, positions did not come closer and the compromise package from the EU Council that landed on the Parliament’s table only on Thursday night left no time for proper negotiations.

Definitely too late, also considering that some agriculture ministers had to fly back to their home countries.

Talks became tenser and eventually collapsed after the Council’s eco-scheme proposal, as MEPs perceived the new 18% ‘floor’ of full flexibility as a provocation.

The European Parliament replied with another apparent provocation: scrapping the “learning period” in the implementation of the CAP, already agreed on by the negotiators. Of course, with mutual provocations, there can be no agreement.

However, this escalating tension was the direct consequence of a specific strategy from the Portuguese presidency, which relied almost exclusively on the final super-trilogue

They went all in, betting on a last-minute agreement, but the move did not go as planned, leading to a breakdown in the interinstitutional talks.

Defending the presidency’s position, the Portuguese Agriculture Minister Maria do Céu Antunes told a press conference that she takes note of what happened in the past but prefers to look to the future.

“We have a famous Portuguese poet who once said: ‘if there is a way, we will get there.’ So, let’s keep going,” she said.

But the last-minute deal strategy risks having counterproductive effects even when it comes to the substances of the CAP reform. An example in this regard comes from the famous amendment 171 on plant-based food alternatives.

As there was no time left to discuss such a complicated issue, the amendment was ultimately scrapped during a technical meeting to facilitate a deal in the jumbo trilogue.

Whatever you may think about amendment 171, the fact remains that much time was spent on finding an overall compromise that could, and should, have been used to discuss other stuff – as was rightly pointed out by an insider.

To conclude, what we chronicled was just an apparent death, as there will be an agreement on the CAP reform in the end.

As experienced socialist MEP Paolo De Castro tweeted, negotiators were just one step away from reaching a CAP deal. That means the right compromise will come.

What will remain is a sense of a wasted opportunity to close a controversial file in the best possible manner, showing unity in the EU on the future of Europe’s farming.

Wojciechowski: CAP reform ‘a new chance’ for small, medium sized farms
As negotiators from the European Parliament, Council and Commission kick off this week’s jumbo trilogue in an attempt to seal a deal on the post-2020 Common Agricultural Policy (CAP) reform, EURACTIV spoke to Agriculture Commissioner Janusz Wojciechowski about his expectations for the week ahead

French farmers split over agri-minister’s ‘status quo’ approach to CAP reform
France is set to stick with the status quo when it comes to the future Common Agricultural Policy (CAP), a stance widely welcomed by trade unionists but criticised by others for its lack of ambition on social and environmental matters. EURACTIV France reports

Well-designed CAP can deliver on biodiversity goals, German scientists say
The devil is in the details when it comes to the EU’s farming subsidy programme’s potential to halt biodiversity loss, according to German researchers, who warn, however, that green ambitions may fail to pack a punch. Julia Dahm has more

What to watch this week:

CAP impact: voices from beyond EU borders
From competition with local products to the recent focus on agriculture sustainability, the Common Agricultural Policy (CAP) carries a lot of clout on the EU’s neighbours and trade partners. In this video reportage, EURACTIV asked agriculture stakeholders and representatives from Switzerland, Uzbekistan, Botswana, and Scotland what they think about the CAP impact in their countries

Get up to speed: Missing last week’s #finalCAPdown fun already? Want to relive it all again? Never fear, EURACTIV is here – you can go back over all the twists and turns from last week’s negotiations with our live blog

Below, you can find a summary of the main differences between the Council and the Parliament proposals during last week’s negotiations

Reactions: You can find a Council summary of the negotiations here and the statements by rapporteurs Peter Jahr, Ulrike Müller, Eric Andrieu and agriculture Commissioner Janusz Wojciechowski on the EU farm policy reform trilogues here

“Weak” Commissioner: EU farmer’s association COPA-COGECA sent a strong statement on Friday against Commissioner Janusz Wojciechowski, saying that the failure to conclude talks was “foreseeable due to the weakness and poor understanding of the Agriculture Commissioner regarding the reality of farming in Europe”

Commission must up its game: In a letter sent to Commission President Ursula Von der Leyen seen by EURACTIV, the association impressed the urgency of reaching a deal, highlighting that the Commission and, in particular, Commissioner Wojciechowski, “must act as a facilitator to reach a balanced, realistic, and sustainable political agreement” 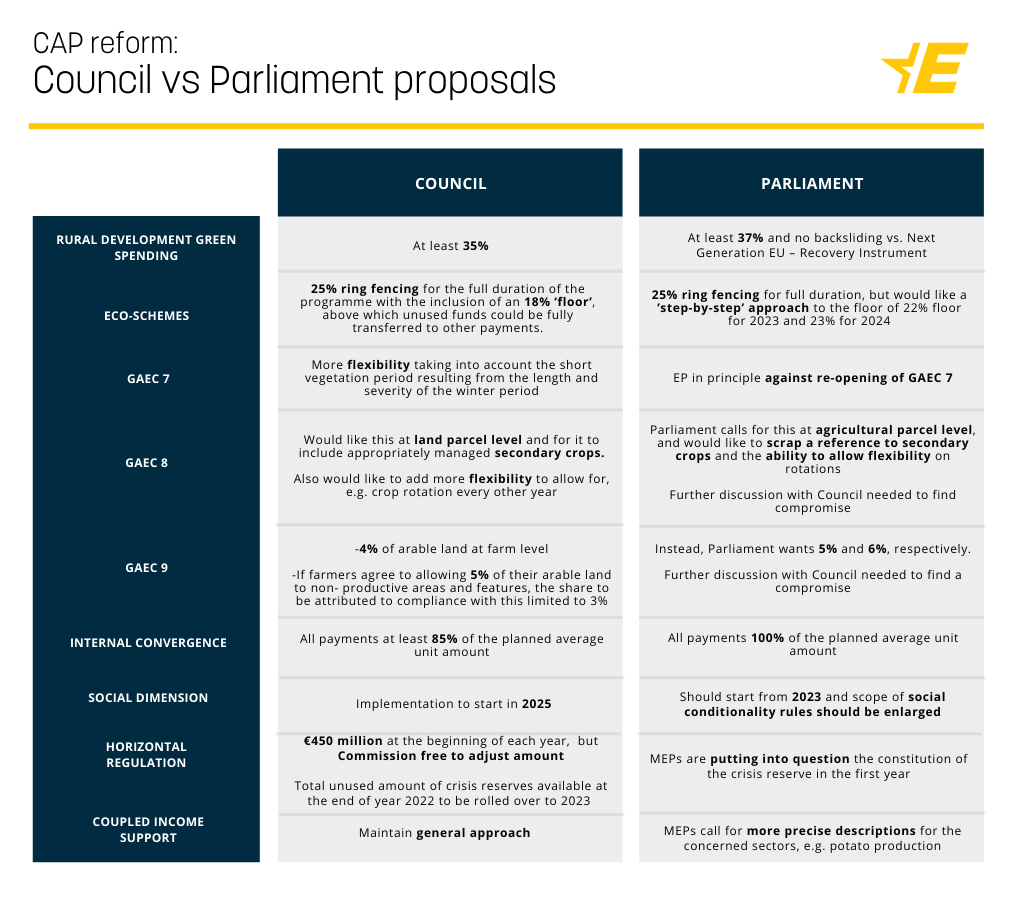 News from the bubble

MEPs flag concerns over Mercosur agreement: A group of centre-right MEPs have written to the trade and agriculture Commissioners to over concern that the pending agreement “will add additional competitive hardships” on farmers. “We recognise that the ratification of the agreement is a priority for the Commission and agree that a swift ratification could be in the interest of a strong European economic recovery after the devastating effect of the COVID-19,” it reads. However, European farmers are “justifiably concerned” with increasing regulatory burdens under the Green Deal and simultaneously added competition through new imports, in particular in the beef and poultry sector, the letter points out

Holistic approach: Following the anniversary of the Farm to Fork Strategy on 20th May, thirteen members of the Agri-Food Chain Roundtable on Plant Protection released a co-signed open letter this week about the importance of a “holistic assessment before making any decisions about the reduction of pesticide use,” including the target for 50% reduction of the use of chemicals as set in the Farm to Fork Strategy

News from the Capitals

SPAIN
The failure to conclude negotiations of the reform of the CAP worries the Spanish countryside and leaves open many unanswered questions that will have a large effect on business and cooperative investments, while there is growing discontent among farmers over the environmental proposals on the table. EURACTIV’s partner EFE Agro reports.

PORTUGAL
Reflecting on last week’s negotiations, Portuguese agriculture minister and current chair of the Agrifish Council Maria do Ceu Antunes tweeted: “After an intense week, the Council decided to interrupt the CAP negotiations. But we are not giving up and want to close the deal during the [Portuguese presidency”. Today we resume work with a meeting of the Special Committee on Agriculture to set timing and strategy.” (Natasha Foote | EURACTIV.com)

GERMANY
Agriculture Minister Julia Klöckner has warned against overburdening farmers when it comes to climate protection. “It doesn’t happen overnight,” she told the newspapers of the Funke media group on Saturday (May 31). “The build-up of humus in soils, for example – to store more CO2 – takes five to ten years, more likely,” she explained. “Such biological processes do not go faster because we are passing a law.” Food security remains the core task of agriculture, she emphasised. “Our farmers produce what we need to live. That will never work entirely without emissions, but with less. “(EURACTIV.de)

FRANCE
Minister of agriculture Julien Denormandie and secretary of state for biodiversity Bérangère Abba have launched a national debate on the future of agriculture last Friday (May 28th). Its aim: to define a roadmap for adapting and protecting French agriculture from the effects of climate change. The announcement follows after a “historic” frost wave hit farmers across the country in early April. Discussions will be organised around three thematics : anticipating the effects of drought and creating a better risk management; strengthening climate resilience of the agrifood sector; and defining a long-term vision on the use of water resources in French agriculture. (Magdalena Pistorius | EURACTIV.fr)

IRELAND
Ireland has begun an investigation of Ireland’s farm biodiversity baseline, according to the Irish Examiner. The Farm Environmental Study will focus on developing methodologies and up-skilling farmers and advisors (Natasha Foote | EURACTIV.com)

ITALY
A medical doctor has been arrested on charges of prescribing narcotics to over 200 field workers of Indian nationality, Italy’s daily Il Messaggero reported. The prescriptions had no therapeutic purpose other than coping with gruelling shifts in the fields between Sabaudia and Terracina, in the Lazio region, to allow exploited workers to endure shifts in the fields of 12 or 16 hours a day. (Gerardo Fortuna | EURACTIV.com)

UK
Farmers are set to stage protests across the over the UK government’s plans to sign tariff-free trade deals with Australia and other countries over fears this could lead to a flood of cheap food imports, according to Farmers Weekly. Farm lobby Save British Farming founder Liz Webster said that farmers have “the fight of our lives” to save our British values. “If this [Australia] deal happens without tariff and quota protections for our industry, then our beautiful countryside and safe British food will be gone forever,” she warned. (Natasha Foote |  EURACTIV.com)

31 May-4 June -There is the European Green Week 2021, dedicated to the ‘zero pollution ambition’. It is designed to provide an opportunity to engage with all stakeholders and interested citizens on how we can work together to make the ambition for a zero pollution and toxic-free environment a reality

1 June – There is a EURACTIV Virtual Conference to discuss the future of agriculture, and how the CAP reform will affect European farmers and consumers alike

2 June – There is the international workshop “Closing the loop: – Improving Soil Health and Fertility through Insect Frass Application”

2 June – There is a Spanish event on the present and future production and consumption of organic food. See here for details