New Delhi | Jagran News Desk: The Puducherry administration has imposed prohibitory orders under Section 144 of the Code of Criminal Procedure and declared a no-fly zone for drones and other unmanned aerial vehicles over the Union Territory in connection with security measures ahead of Prime Minister Narendra Modi’s visit on Tuesday. PM Modi is scheduled to address an election rally today to woo voters for NDA candidates contesting the April 6 Assembly polls. PM Modi will also address an election rally in Kerala’s Palakkad today for Kerala Assembly Elections 2021. A heavy deployment of the police force has also been made at the venue. He is also scheduled to address an election rally in Tamil Nadu’s Dharapuram.

Meanwhile, West Bengal will also witness a face-off between Chief Minister Mamata Banerjee and Union Home Minister and BJP leader Amit Shah. Both the leaders are scheduled to hold roadshows in West Bengal’s Nandigram to woo the voters ahead of the second phase of West Bengal Assembly Elections 2021. Mamata Banerjee has decided to contest the WB Polls from Nandigram, while the BJP has fielded, TMC turncoat Suvendu Adhikari from the assembly constituency.

Here are the LIVE updates from Assembly Elections 2021:

6:00 pm: This is Balrampur village, Nandigram, BJP workers are beating them (TMC worker) here,they’re demanding security. I’ll request Election Commission to give them security as law & order is in their hands: West Bengal CM Mamata Banerjee visiting the house of a TMC worker in Nandigram

5:00 pm: I had a reasonably long experience in politics, I have seen many elections but #PuducherryElections2021 is unique because the sitting Chief Minister has not been given a ticket: Prime Minister Narendra Modi in Puducherry

4;45 pm; So many years of loyalty, lifting the slippers of his leader, doing wrong translation to impress his leader. Still no ticket. This clearly shows how much of a disaster his govt has turned out to be: Prime Minister Narendra Modi in Puducherry

4;20 pm; In long list of non-performing Congress govt over the years, previous Puducherry govt had a special place. Delhi high command govt of Puducherry failed on all fronts, take any sector – education, filling of medical seats, welfare of SC-STs, there was only loot: PM in Puducherry

4;00 pm; Prime Minister Narendra Modi arrives in Puducherry, where he will address a public rally shortly.

3:30 pm: They (BJP) have another plan to kill a woman from their own party with goons they have brought from Bihar & UP and put the blame on Bengal. This is their plan: West Bengal CM Mamata Banerjee

2:45 pm: Y’day, an elderly lady Shova Majumdar lost her life in West Bengal. We saw with horror how goons belonging to TMC brutally attacked her just because her ideology was different. This has been in news for a long time. Did Congress show any empathy? Did DMK & Left condemn it:PM Modi

2:40 pm: Trinamool Congress (TMC) registers a complaint with Election Commission over, “Gross violation of democratic ethics and the Model Code of Conduct by Prime Minister during his visit to Bangladesh.”

2:35 pm: Kerala | I wish for you to show to everybody in this country that you will not be fooled by any false promises, corrupt govt, people who want power and do not serve you: Congress leader Priyanka Gandhi Vadra addresses a public rally in Karunagappally, Kollam district

2:29 pm: Young crown prince of DMK, who has sidelined many senior leaders, too made horrible remarks. DMK did nothing to stop him. Never forget March 25, 1989. In Tamil Nadu Assembly, how did DMK leaders treat Amma Jayalalithaa Ji? DMK & Congress will not guarantee women empowerment: PM

2:27 pm: To insult women is part of Congress-DMK culture. A few days, one of MLA candidates of DMK, Mr Dindigul Leoni made horrible remarks against women. DMK has done nothing to stop him: PM Modi in Dharapuram, Tamil Nadu

2:25 pm: The speeches of their leaders have nothing positive to offer, they hardly talk about their vision or work. All they do is demean others & spread lies. These days Congress and DMK have launched their outdated 2G missile, this had one clear target — the women of Tamil Nadu: PM Modi

2:20 pm: On one hand, NDA has our development agenda, on the other hand, Congress and DMK have their our dynasty agenda: PM Narendra Modi in Dharapuram.

2:15 pm: In a few days from now, Tamil Nadu will vote to elect a new assembly. NDA family seeks your blessing to serve the people of the state. We seek your votes based on a solid agenda of all-round development, inspired by the ideals of MGR & Amma Jayalalithaa Ji: PM Modi in Dharapuram

2:10 pm: After reaching here, I got a sad piece of news. A woman was raped within 5-km radius of the place where Mamata Banerjee is staying. If a woman can be raped at a time when she is present in the area, how can women be safe & secure? Union Home Minister Amit Shah in Nandigram

2:00 pm: Looking at the enthusiasm among the people of Nandigram, it is clear that Bharatiya Janata Party’s candidate Suvendu Adhikari is going to win from here. The easiest way to bring ‘parivartan’ is to make sure Mamata Didi loses from Nandigram: Home Minister and BJP leader Amit Shah

1:55 pm: We want to make Assam free from floods. Satellite mapping will be done, reservoirs will be created. We want to make every village in the State ‘aatmanirbhar’: BJP President JP Nadda in Dharmapur, Assam

12:50 pm: Remember, if I have entered Nandigram once, I will not leave. Nandigram is my place, I will stay here: West Bengal Chief Minister Mamata Banerjee in Sona Chura, Nandigram.

12:45 pm: I could have contested from any other constituency but I have chosen Nandigram to pay my respect to the mothers & sisters of this place. To salute the Nandigram movement, I chose Nandigram over Singur: West Bengal Chief Minister Mamata Banerjee in Sona Chura, Nandigram 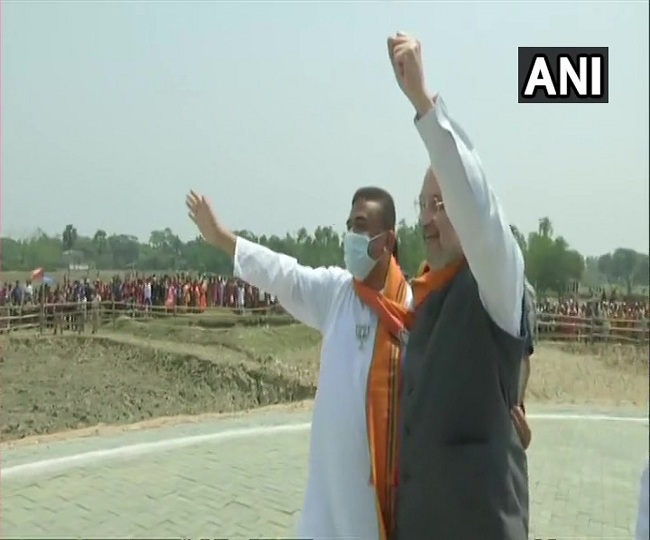 12:10 pm; Left parties have been in power here many times. But their leaders still behave like junior-level goons. Under them, political rivals are killed, hacked and beaten. BJP govt in Kerala will stop this violence: PM Modi in Kerala’s Palakkad

12:05 pm: Kerala and tourism have a close link. Sadly, LDF & UDF have not done much to improve tourism infrastructure here. We want technology to serve as a basis for growth: PM Modi in Kerala’s Palakkad

12:00 pm: Our government is undertaking many steps for the growth of agriculture and the welfare of farmers. For many years, governments promised MSP hikes, but it was our government that had the honour of raising the MSP for farmers: PM Modi in Palakkad

11:54 am: Kerala | The time has come for FAST development in Kerala- F for fisheries and fertilisers, A for agriculture and Ayurveda, S for skill development and social justice and T for tourism and technology: PM Narendra Modi addressing a public meeting in Palakkad

11:52 am: ‘Metroman’ Sreedharan Ji, a man who has done excellent work to make India modern& improve connectivity, a man admired by all sections of society, has devoted himself to Kerala’s progress. As a true son of Kerala, he thought beyond power, stood firm on his commitment to Kerala: PM

11:50 am: For many years, the worst kept secret of Kerala politics was the friendly agreement of UDF and LDF. Now, the first time voter of Kerala is asking — what is this match fixing? People are seeing how UDF & LDF misled them: PM Narendra Modi in Palakkad.

11:45 am: In West Bengal, Congress & Left are one; they were partners in UPA 1 in Delhi. The Left continued to give issue-based support to Congress to UPA 2 but here in Kerala during elections they put allegations: PM Modi

11:35 am: Today I have come among you to seek your blessings for the BJP in the upcoming state elections. I have come here with a vision that is refreshingly different from the current situation in Kerala: PM Modi in Palakkad.

11:30 am: Kerala | I’ve drawn up a master plan for this constituency which includes 24-hr water supply, efficient solid waste management scheme. I also want to have green cover for the area by planting 25 lakh trees in next 5 years: E Sreedharan, BJP’s candidate from Palakkad

11:20 am: Kerala: ‘Metro Man’ E Sreedharan felicitates PM Narendra Modi in Palakkad where the latter will address a rally shortly. 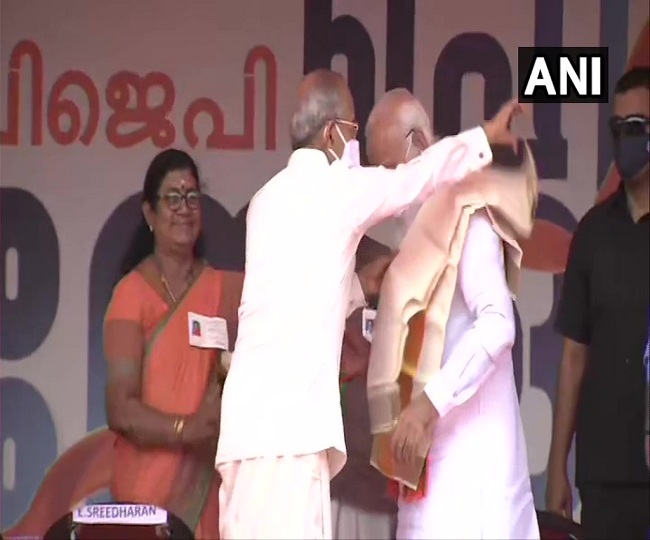 11:00 am: Mamata Ji has lost mental balance. She is highly disappointed by negative response in Nandigram. Speaking about UP instead of condoling her (elderly mother of a BJP worker) death is like running away from responsibilities. She is scared of defeat:Union Minister Dharmendra Pradhan

10:00 am: To protect the right of every individual, we (BJP) will come out with Uniform Civil Code and population control mechanism. If you are in love with your nation, then you will have to accept it: Suresh Gopi, actor & BJP candidate for Thrissur 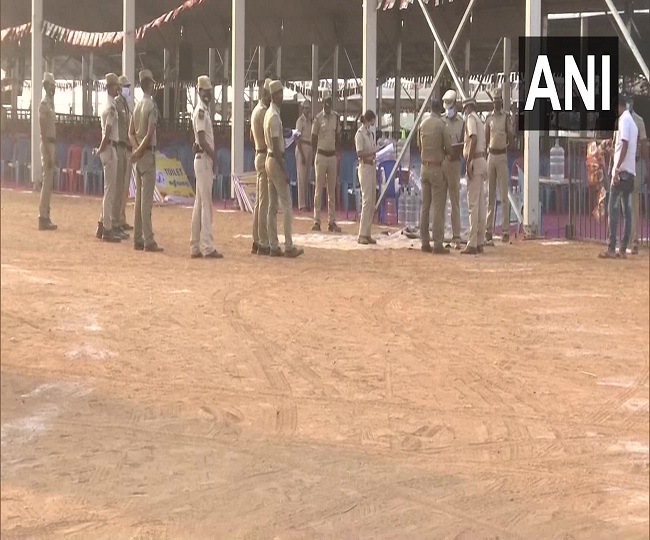 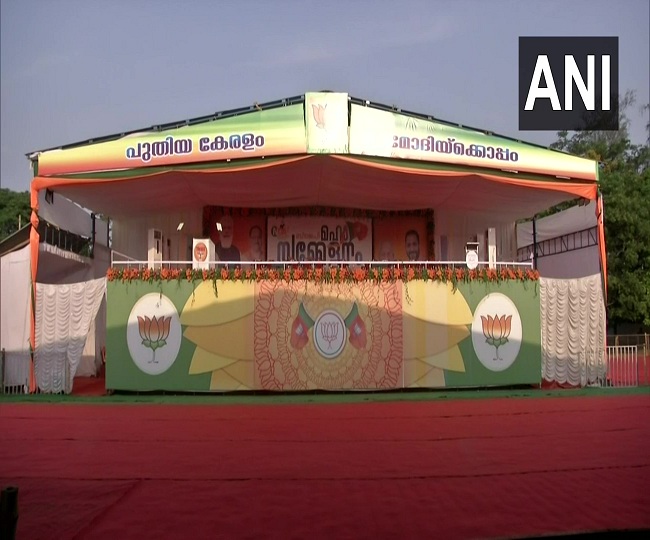 9:00 am: West Bengal: A BJP delegation submitted a memorandum to West Bengal Governor Jagdeep Dhankhar demanding strict action against those responsible for the death of an 85-years-old mother of a BJP worker, Shova Majumdar