So argue the authors of a paper, recently published in the Journal of the World Aquaculture Society, who have analysed farm-level data from Bangladesh’s aquaculture industry, hoping to identify areas where the sector can improve. Since the industry contains both small-scale, subsistence farmers and intensive and industrialised operations, the researchers focused on areas where fish farmers could reduce production risks and improve overall efficiency.

The team found that if pond farmers could increase feed, labour and capital inputs during the production cycle, they would limit production risks and improve yields. The data also suggests that farmers who lowered stocking densities but intensified feeding would see an efficiency boost. The other major conclusion focused on university extension services. The researchers found that farmers who used the services when faced with a water quality challenge or disease outbreak faced fewer production risks and had more successful farm cycles.

Bangladesh’s fisheries and aquaculture sector has been a development success story for the last 20 years. Since 2000, aquaculture production has increased threefold and the country’s “blue growth” strategy has made it the world’s fifth largest aquaculture producer. Most fish farmers use outdoor earthen ponds to culture finfish like carp, tilapia and pangasius.

Though production and productivity indicators show massive gains for the industry, these gains aren’t evenly spread across Bangladesh’s farm sites. Fish farmers and policymakers are identifying ways to improve farm-level efficiency, hoping that this will raise the industry’s profile. 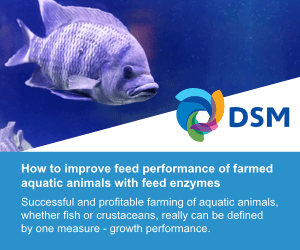 One way to make aquaculture more efficient is to reduce on-farm production risks. The theory is that ill-managed risks can lead to inefficient use of farm resources, which translates into poorer yields at the end of the farm cycle. If the overall risk is reduced, fish farms become more efficient and outputs become more reliable and profitable.

The nature of pond aquaculture

Bangladesh’s pond aquaculture sector is diverse – producers grow a variety of species and farm sizes vary from family-run plots to intensive operations. It’s a high-risk business as well. Overall productivity can be influenced by external factors that aren’t always within the farmer’s control. There is plenty of scope to make the sector less risky and more efficient – but producers need to know what changes to make.

To get a better picture of the industry, researchers from Bangladesh Agricultural University surveyed 225 pond aquaculture producers from Mymensingh district, the country’s largest fish-producing region. The team asked the respondents about their management practices, farm inputs and labour. Their analysis used the stochastic frontier production (SFP) method to estimate the farm’s potential efficiency and capacity in a best-case scenario. This let the researchers identify the combination of farm inputs that would optimise production and reduce risks, letting the farms become more efficient.

Key trends in the data

Initial survey data shows that the biggest farm input was feed, followed by fingerlings, labour and capital investments for equipment and farm infrastructure. Feed was the biggest driver of operating costs by far, especially for intensive and semi-intensive grow-out operations. The data suggests that most farms spend 60 to 70 percent of production costs on feed. The researchers found that labour accounted for 5 percent of farm expenditures.

Interestingly, researchers found a positive relationship between farm size and overall productivity – implying that larger farms are more productive than smaller ones. This goes against trends observed in other aquaculture-producing countries where smaller farms were found to be more productive.

Larger farms tend to have lower stocking densities but higher feeding intensities than their smaller counterparts. This translates into higher yields at the end of the farm cycle.

The researchers believe that large farms in Bangladesh have greater economic advantages, are more mechanised and have access to technical expertise. This would give them a leg up when compared to smaller farms. The data reveals that larger farms tend to have lower stocking densities but higher feeding intensities than their smaller counterparts. This translates into higher yields at the end of the farm cycle.

On a basic level this makes sense – since many fish farms in Bangladesh are small-scale and use less-than-optimal amounts of feed, additional investments in these areas would curb production risks. A similar explanation holds true for labour inputs: since many farms rely on family labour for day-to-day tasks, an increase in work hours might well translate into improved yields. If farmers across the sector can use optimal amounts of feed and labour, yields could increase substantially.

The researchers noted that farms with higher risk scores tended to have increased fingerling density. In this case, it appears that farmers may opt for high fingerling volumes in hopes of gaining a production advantage down the line. However, if the stocking density is too high, ammonia levels may spike and levels of dissolved oxygen in pond water can become too low, leaving the fingerlings vulnerable.

The data suggest that improving access to university extension services and networking would help pond farmers de-risk their operations and become more efficient. Extension services are typically staffed by specially trained members of Bangladesh’s Department of Fisheries, making them an excellent resource for farmers who experience challenges during the culture period. If extension services are more widely available, small-scale farmers would gain the technical knowledge that is usually available to larger aquaculture operations.

Read the full review in the Journal of the World Aquaculture Society.