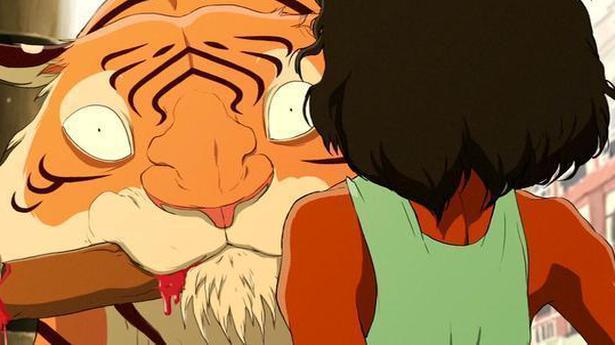 Kolkata returns to the swamps it was reclaimed from in this new, internationally acclaimed futuristic animated short film about climate change, ‘Wade’

It catches you unawares. There’s the Kolkata you have always known, with its rows of hideous highrises, the red-painted buildings from an older era, the Howrah Bridge, the blue-white railings, the mesh of overhead wires blocking the sky.

If they all look battered and crumbling, well, that is how Kolkata is. Then you realise with a start that the rot has gone deeper than ever before — the roads are under putrid green water, the trams are ghost ships disintegrating in sheds, the railway platforms are submerged and the last trains have left, never to return. Crows circle over this wasteland, cawing menacingly, a crocodile slips under the scum at the erstwhile Gariahat crossing, snakes slither, catfish swim. This is the Kolkata of the future as imagined by the short animation film, Wade. Climate change has returned the city to the swamps it was reclaimed from and the well-heeled have fled to drier grounds.

The people left behind are a straggly set of migrants from the Sundarbans, which is now a few scattered islands floating like dead leaves in a ravenous sea. Rising sea levels have displaced not just the human inhabitants but also animals. In Wade, a terrifying encounter takes place between two groups of climate change migrants — humans and tigers — in a ravaged Park Street. The wide-eyed humans and animals, the background score of swamp sounds mixed with a grating metallic roar, the absence of dialogues, and the visuals of a broken city create an atmosphere of menace, which is compounded by the realisation that this might not just be a dystopic vision after all.

Around 17 million people were displaced by natural disasters in 2018; and, according to a World Bank study, 143 million people could be rendered homeless by climate change-related catastrophes by 2050 in sub-Saharan Africa, Latin America and South Asia. The Ghoramara island in the Sundarbans is sinking steadily as a result of climate change. If global temperatures continue to rise at the current rate, coastal cities like Kolkata might well be under water in 30 years’ time.

Wade is the creation of Ghost Animation, a collective of young animators, artists and filmmakers from all over India, based in Kolkata. Their signature style is 2D animation, drawn by hand, frame by frame.“Every frame is a unique drawing made from scratch, and we love the flavour that brings to the story,”say Upamanyu Bhattacharyya and Kalp Sanghvi, who make up the team along withGaurav Wakankar, Isha Mangalmurti, Shaheen Sheriff and Anwaar Alam. These days, one usually doesn’t associate Kolkata with skilled young professionals. But, Sanghvi says, “Kolkata has been very good for us, and we’ve had no trouble bringing some very good talent to the city to work with us.”

Their closeness to Kolkata is apparent in Wade: the visuals will move any viewer but will probably leave a Kolkatan devastated. The film has that effect because it recreates the city not just through the recognisable Howrah Bridge or Victoria Memorial but

also through smaller details like the pamphlet-plastered electricity boxes on South Kolkata roads, the ubiquitous graffiti, the blue mosaic on a Metro station wall. This familiarity lends plausibility to the unfamiliar future, making it scarier. For instance, Park Street, where the main action takes place, still retains the pink Flurys banner, the Stephen Court building, the McDonald’s logo.

Explaining why they chose to set the action in Park Street, Bhattacharyya says, “Because it’s recognisable and because most people of a certain level of privilege have had good times there. We felt that all the decadence and luxuries that Park Street embodies are surviving on borrowed time, and soon it’ll be a shell,” adding, “People who have seen the future of Park Street as depicted in Wade have described it as akin to ‘watching a good friend suffer.’”

Ghost Animation films usually tend to be more about ordinary people. In a West Bengal tourism film, toddy-tappers atop palm trees and the Darjeeling toy train make up dazzling kaleidoscopic patterns, accompanied by footages of the Maidan football players and schoolgirls balancing themselves on railway tracks. In Wade, the landed rich have vanished altogether, leaving the migrants to fight it out in a space still echoing with the revelry of heedless days.

Wall graffiti declaring ‘Send back! Save Kolkata from climate change refugees’ speaks of a time when city dwellers had closed ranks to keep out the newly-arrived. “Society is not accepting of people fleeing situations of distress. Today, our borders are more rigid and we have a sharper sense of ‘us vs. them’ than ever before,” says Sanghvi.

The ‘them’ include the fauna, the most powerless of them all: Ghost Animation’s short film, Kinara — The Edge, made for the Wildlife Trust of India, also featuring tigers, is a chilling story of how humans evict animals from their own hunting grounds and kill them when they return looking for food.

Expectedly, Wade is getting a lot of attention internationally, having been selected at nearly 40 global festivals, including the 2020 Annecy International Animated Film Festival (held in June), where it won the City of Annecy Award. The story of Wade continues to grow: the team is currently working on an anthology of comic short stories further exploring the Wade universe, delving into how people ignored the climate crisis while the city still looked ‘normal’ and how life gradually changed for the worse. Ominous? Yes, but it might just wake us up.