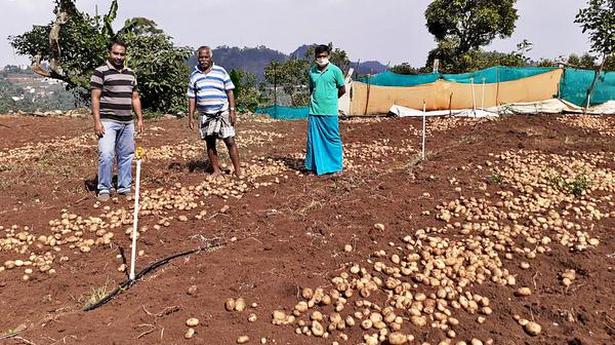 While the COVID-19 pandemic proved to be an extremely challenging time for farmers in the Nilgiris, it could have inadvertently forced small farmers to come together and eliminate the need to pay commissions to middlemen and ensure they get better prices for their produce.

One such effort, spearheaded by the Horticulture and Agricultural Marketing departments in the Nilgiris, has paid rich dividends to hundreds of farmers in and around Kotagiri. Known as the Kotagiri Collective Farming Farmers Producers’ Organisation, the registered company, which counts over a 1,000 farmers from 10 Farmers Producers’ Groups (FPG) among its members, has managed to move around 450 tonnes of vegetables during the last three months.

“When the pandemic hit, the prices of vegetables like carrots and potatoes and other hill produces crashed due to restrictions in movement between districts and other factors. This led many farmers to dump their produce or to be used as cattle fodder,” said R. Chandran, a farmer from Kotagiri.

“To prevent such instances from happening, the collective in Kotagiri, which purchased a pick-up truck with assistance from the government, offered to procure vegetables from farmers in the Kotagiri block and also in Thengumarahada. They then transported the vegetables to other districts such as Tiruppur, Coimbatore and Erode, as well as to the states of Kerala and Karnataka.

Farmers, who had been forced to sell their produce for a pittance to middlemen looking to take advantage of the lack of demand for their produce, managed to get anywhere between ₹ 3 to ₹ 6 extra for a kg of their produce because of the collective, said a farmer.

Over the last three months, more than 450 tonnes of produce, worth ₹ 90 lakh have been procured from farmers and moved to markets in the Nilgiris and surrounding districts.

The pandemic has put down immense challenges, which has served to strengthen the position of farmers who are part of FPGs across the district, said T. Kalaivani, Agricultural Officer, Udhagamandalam.

The Horticulture Department said it had set up cold-storage facilities and processing centres where farmers could come and store vegetables if they were unable to send them to the market or unable to get a good price for their crop.

You have reached your limit for free articles this month.

Find mobile-friendly version of articles from the day’s newspaper in one easy-to-read list.

Enjoy reading as many articles as you wish without any limitations.

A select list of articles that match your interests and tastes.

Move smoothly between articles as our pages load instantly.

A one-stop-shop for seeing the latest updates, and managing your preferences.

We brief you on the latest and most important developments, three times a day.

Not convinced? Know why you should pay for news.

*Our Digital Subscription plans do not currently include the e-paper ,crossword, iPhone, iPad mobile applications and print. Our plans enhance your reading experience.