Since the Hagley Oval surface assists the quick bowlers, consider picking a minimum of 3 pacers in both of your Dream11 fantasy teams.

The 2nd of the 3-match ODI series between New Zealand and Bangladesh will be played on 23rd March at Hagley Oval in Christchurch.

The match is scheduled to start at 2:00 PM local time and 6:30 AM IST and it will be streamed live on Fancode.

New Zealand will take on Bangladesh in the second of the 3-match ODI series on Tuesday. With some exceptional bowling performances, New Zealand beat Bangladesh by 8 wickets in the first ODI to take a 1-0 lead in the series. New Zealand were thoroughly professional in their approach on the field and didn’t concede too many runs. Trent Boult’s brilliant spell and Henry Nicholls’s fantastic batting sealed the game for them. It’s hard for any visiting side to come and dominate here in New Zealand, and given the kind of form New Zealand are in, they will look to clinch series with one game still left.

On the other hand, Bangladesh became an easy fish for the hosts as they were bundled up for just 131 runs inside 42 overs. Since they are coming back from the spin-friendly conditions of Bangladesh, where they white-washed West Indies 3-0 in the ODI series, it is understandable that it will be hard to acclimatise to the pacy and bouncy tracks of New Zealand. They will need to level up their game if they were to stay in the hunt in this series.

It will be sunny in the afternoon with the maximum temperature being 20 degrees Celsius. Later in the evening, it will drop down to 15 degrees Celsius and the humidity will be 73 per cent. There is no chance of precipitation for this match.

The surface here in Hagley Oval has got a good bounce and carry. The quick bowlers will love to bowl on this wicket. Having said that, batsmen can score runs as well if they spend some time settling down. Both these sides have played two matches on this venue, and New Zealand came out on top on both occasions. Anything over 280 is a competitive score on this surface.

Trent Boult was the player of the match for his outstanding spell of bowling in the first ODI. He picked up 4 wickets at an economy of 3.1 runs per over. He can swing the ball both ways and he is going to trouble the batsmen with his pace and swing.

Playing his 50th ODI, Henry Nicholls batted till the end in the first ODI of the series and scored unbeaten 49 runs from 53 balls. In his ODI career, he has scored 1378 runs at an average of 37.24, with the highest score of 124.

Martin Guptill showed aggressive intent with the bat in the first ODI. Chasing the modest of totals, he set up a perfect platform by scoring a quickfire 38 runs from just 19 balls.

Mahmudullah was the top scorer for Bangladesh in the 1st ODI, he battled hard and scored 27 runs at a strike rate of 50. He is a reliable batsman in the middle order for his side, consider picking him in your fantasy team for his experience.

Bangladesh skipper Tamim Iqbal got a good start, but he was trapped in front by Trent Boult on 13. Tamim Iqbal has a huge role to play in the remaining 2 matches of this series.

Mushfiqur Rahim is one of the most experienced players in the current Bangladesh squad. He ended his innings on 23 in the first ODI. He has played 222 ODI matches and has scored 6289 runs at an average of 36.35, with the highest score of 144. 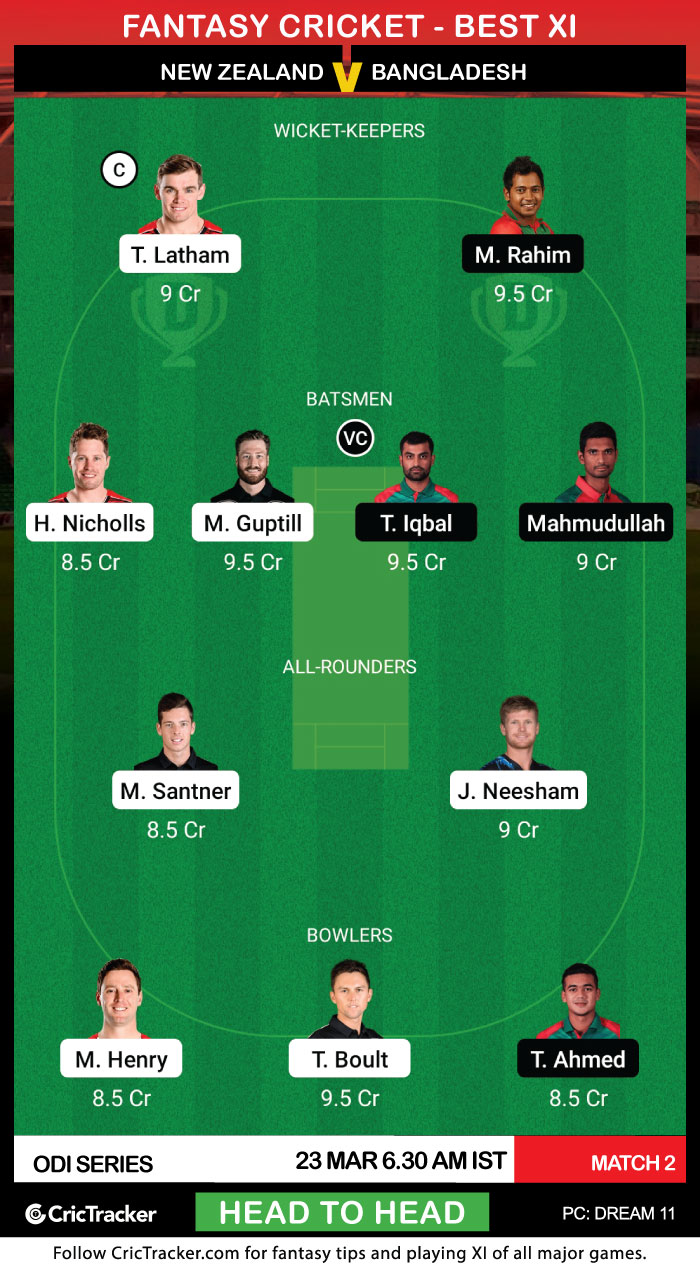 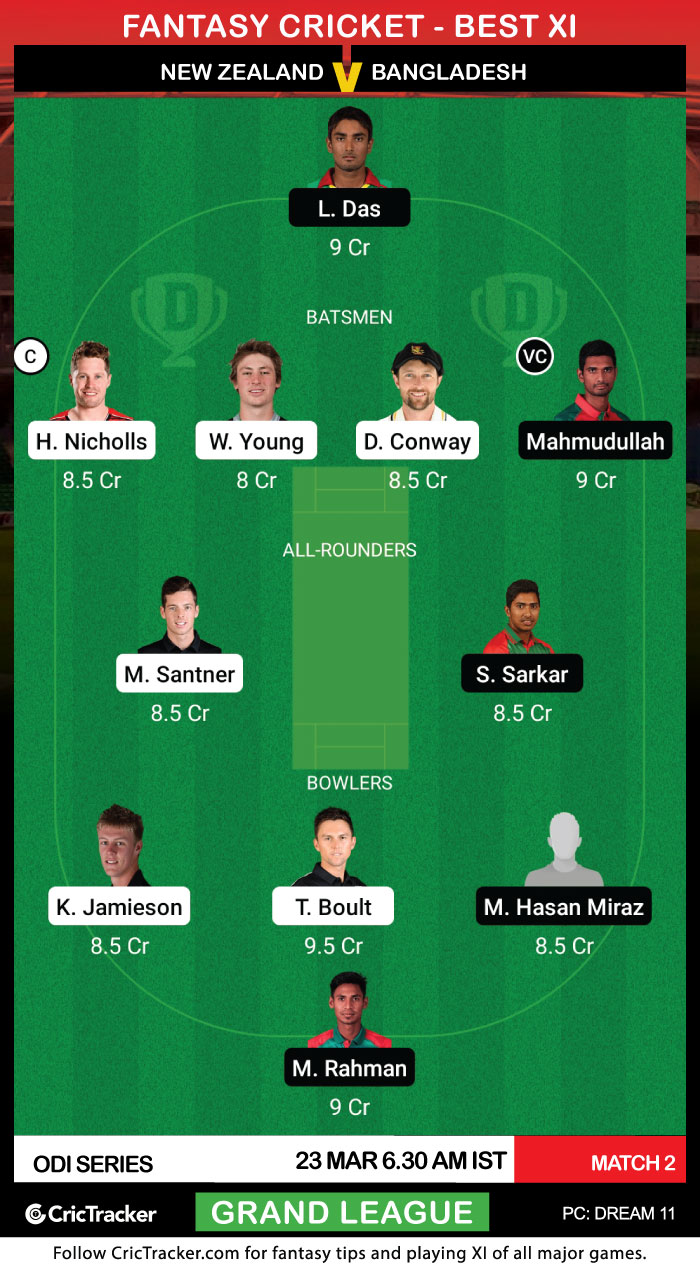 Since the Hagley Oval surface assists the quick bowlers, consider picking a minimum of 3 pacers in both of your Dream11 fantasy teams.

New Zealand are expected to win this match.

Note: Updated Fantasy teams and Playing XIs of every match will be provided in our Telegram channel if the information is available.

Disclaimer: This team is based on the understanding, analysis, and instinct of the author. While selecting your team, consider the points mentioned and make your own decision.