When Cyclone Amphan ripped through southern Bangladesh a year ago this month, Paritosh Chandra Mandal’s home and land were drowned as embankments holding back the nearby Kopotaksh River crumbled, and its swollen torrent swept through his village.

Today, with his home ruined and much of his land vanished or still flood-threatened, he is living with his family in a shack on a raised embankment near his former home in Hajatkhali, in southwest Bangladesh’s Khulna district.

“At one time I had everything. I used to make a living by working agriculture on my own land. But now there is nothing,” he told the Thomson Reuters Foundation.

“I live with my family on this embankment. I get food for five members of my family through daily wages. But there is no work in the area now. It is very difficult to get food three times a day,” the 45-year-old said.

A year after Amphan roared through South Asia, killing more than 100 people and causing more than $US13 billion in damages, an estimated half-million people in southern Bangladesh’s Khulna, Satkhira and Bagerhat districts are still struggling to recover.

Many in Mandal’s area are living on embankments and roadsides, or in cyclone shelters or school buildings, while others have left to try to find work elsewhere.

“At one time I had everything. I used to make a living by working agriculture on my own land. But now there is nothing.”

– Paritosh Chandra Mandal’s home and land were drowned due to Cyclone Amphan.

Most have sold off family assets to survive or taken out loans, unsure how they will repay them.

The broken embankment near Mandal’s former home has now been repaired – but for many like him there is little left behind it to go home to, local families said.

Bangladesh has worked hard to slash once-huge death tolls from powerful cyclones, through greater use of storm shelters, early warning systems and other interventions, officials said.

“Our efforts have greatly reduced the amount of damage and deaths in cyclones,” said Enamur Rahman, Bangladesh’s state minister for disaster management and relief.

He noted that after Amphan, “damage to the embankment and polders could not be completely recovered – but that work continues”. 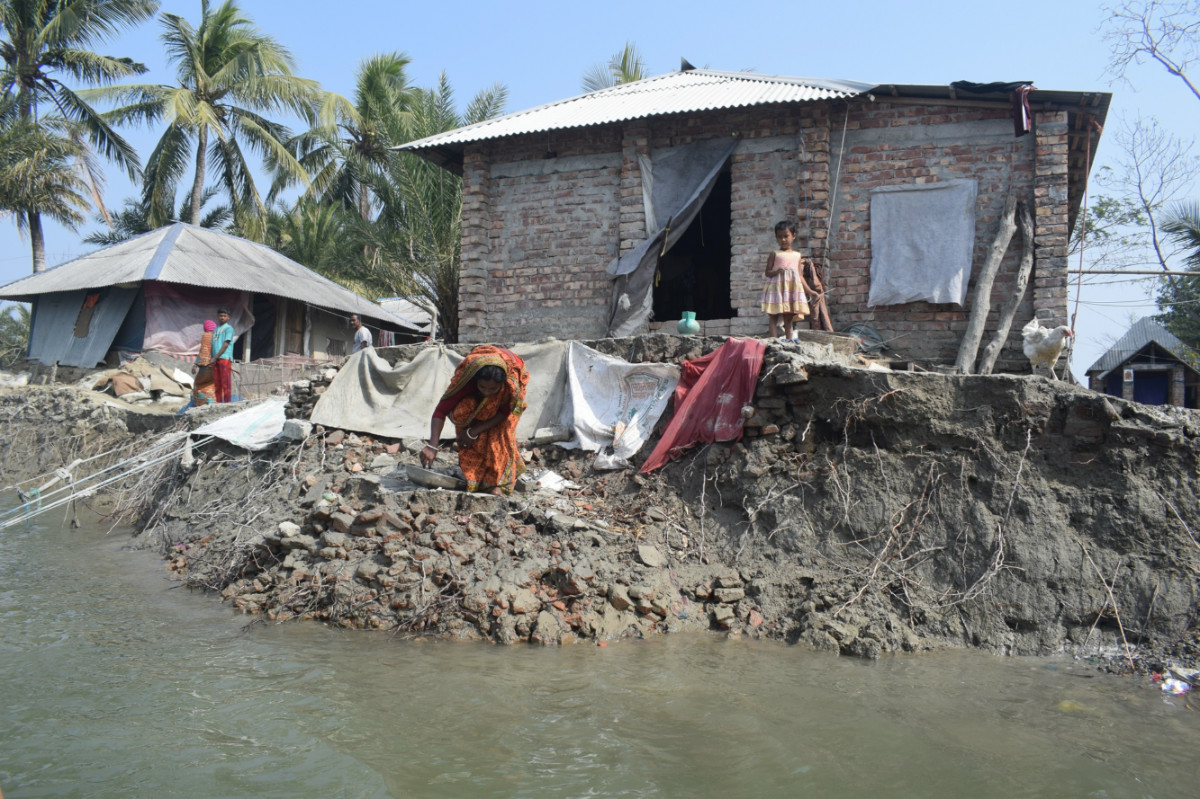 Mrinal Baulia bends to work in front of her home in the village of Katmarchar in southern Bangladesh, which was flooded for 10 months following Cyclone Amphan, after the cyclone, on 30th April. PICTURE: Thomson Reuters Foundation/Rafiqul Islam Montu

Mohammad Mohsin, secretary of the disaster management ministry, said the recovery effort was particularly impressive in the face of the COVID-19 pandemic, which has hit budgets and limited safe movement in the country.

But in areas hardest hit by Cyclone Amphan, many people are still struggling, with homes ruined and former farms and shrimp ponds still empty.

On Bangladesh’s south-west coast, the village of Kurikahunia remained underwater until recently. Mohammad Mafuar Rahman, 39, who once farmed there, now lives on a relative’s land and drives a van he bought with a loan to try to earn an income.

“I had a house, I had agricultural land,” he said. “I have nothing now.”

“I had a house, I had agricultural land. I have nothing now.”

Bhabatosh Kumar Mandal, chairman of a local council in Satkhira District working on cyclone preparedness, said big advances in preparing for storms now needed to be matched with equally strong efforts to help those hit by them recover, especially as climate change brings worsening storms.

In particular, work is needed to rebuild and strengthen the embankments families rely on, he said.

The International Federation of Red Cross and Red Crescent Societies (IFRC) noted that the COVID-19 pandemic made rebuilding efforts particularly difficult in 2020. 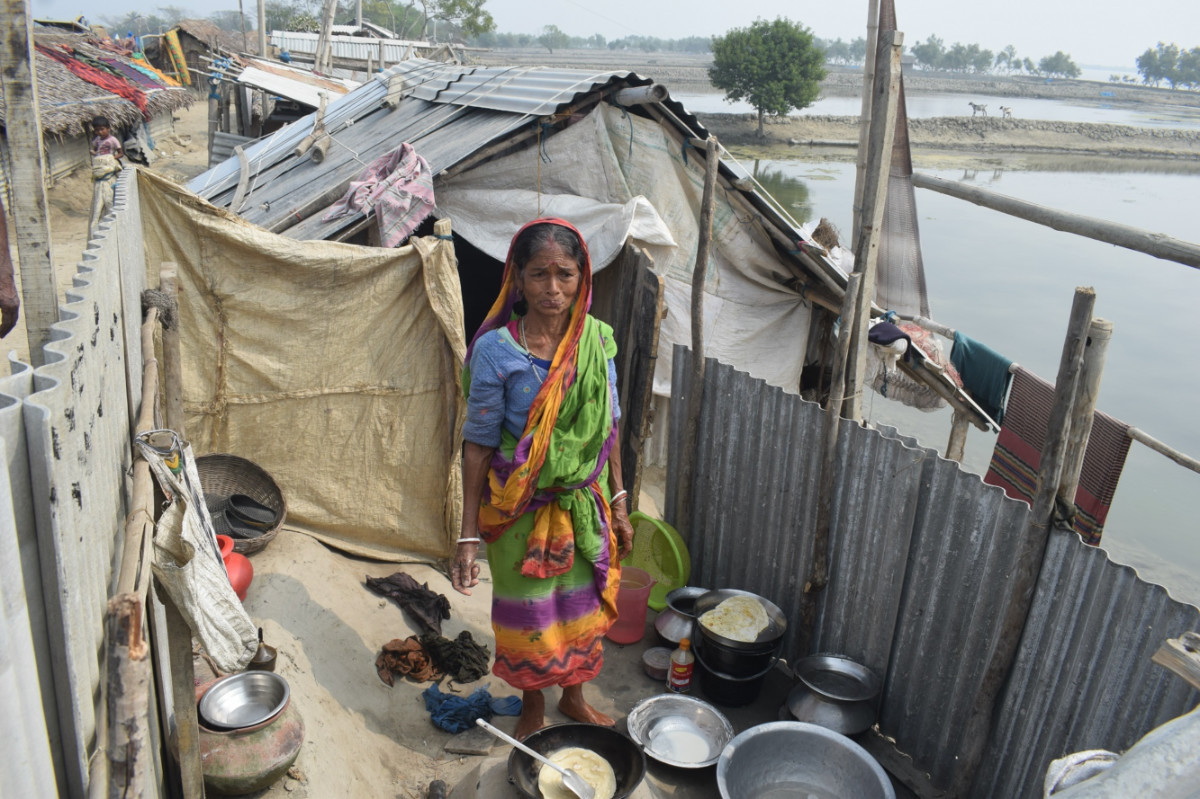 After her home was destroyed in Cyclone Amphan, Anita Rani could not find another place to settle so remains living in a tin shack on the Hajatkhali embankment, near her former home in southern Bangladesh, even though the embankment continues to flood, on 30th April, 2021. PICTURE: Thomson Reuters Foundation/Rafiqul Islam Montu

“We need to invest more in these programs,” he said. “Countries like Bangladesh need more discussions globally and nationally to push for more funding to help the affected communities.”

Efforts were needed more generally as well to cut poverty and boost access to social safety nets to build communities better able to stand up to worsening stresses, he added.

M Zakir Hossain Khan, executive director of the Change Initiative, a Bangladesh non-profit working on equity and justice issues, said reducing cyclone impact on the country’s most vulnerable would require bringing together government and grassroots efforts in a “whole-of-society” approach.

That might mean engaging young local IFRC volunteers to make sure community-led disaster responses work alongside government-led programmes, while making sure governments listen to and integrate local efforts to reduce disaster risks.

“The decentralised, bottom-up approach would be integrated and would be obligatory for all public agencies,” he said.

Rahman, Bangladesh’s state minister, said the country’s existing mechanisms – including the Disaster Management Act and Disaster Management Standing Order – were strong and notably automatically set in motion the action needed in the face of cyclones.

“No one has to command when disaster strikes. On the basis of this order, works can be done properly,” he said.

Still, “we have taken steps to further strengthen the ongoing mechanism”, he said. 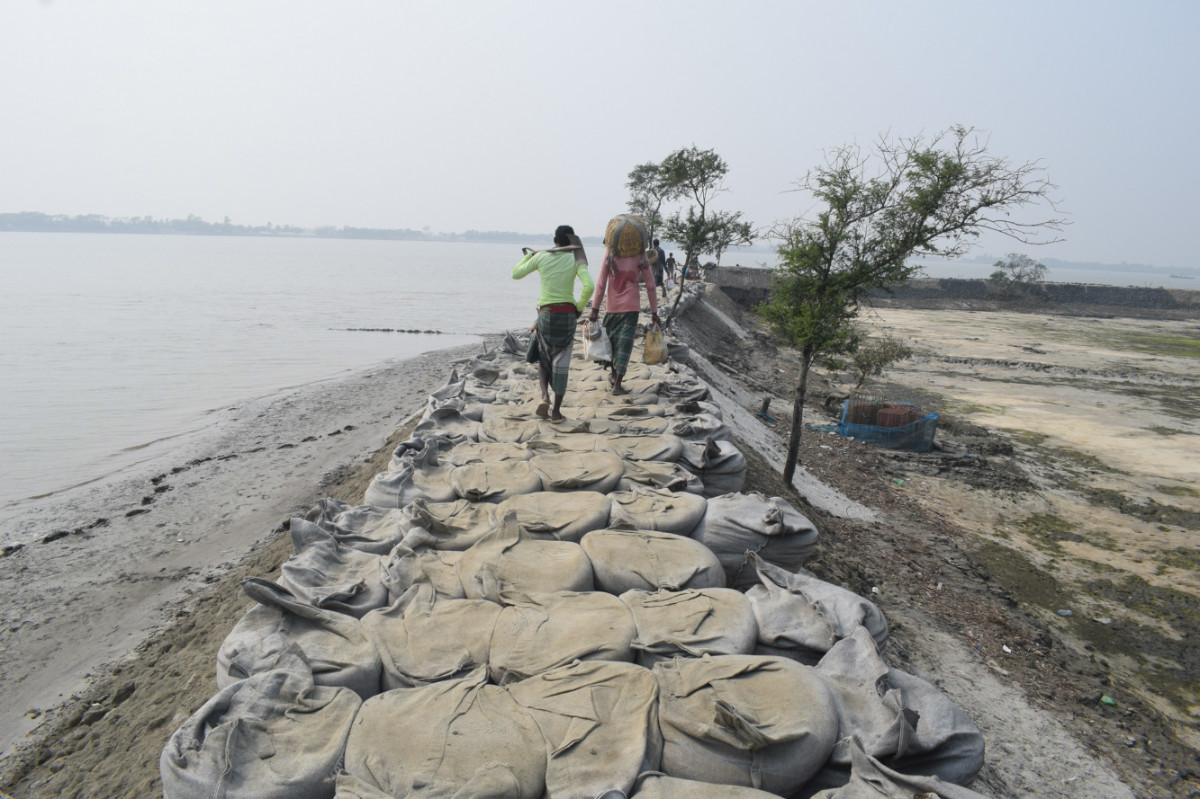 A view of an embankment broken by Cyclone Amphan but now strengthened with sandbags, near Katmatchar village in southern Bangladesh, on 30th April. PICTURE: Thomson Reuters Foundation/Rafiqul Islam Montu

That is of little comfort, however, to families still struggling to get by on embankments, some displaced now for a year.

“If this situation continues we will not be able to live here,” he said. “How many times can we build a house in one life?”