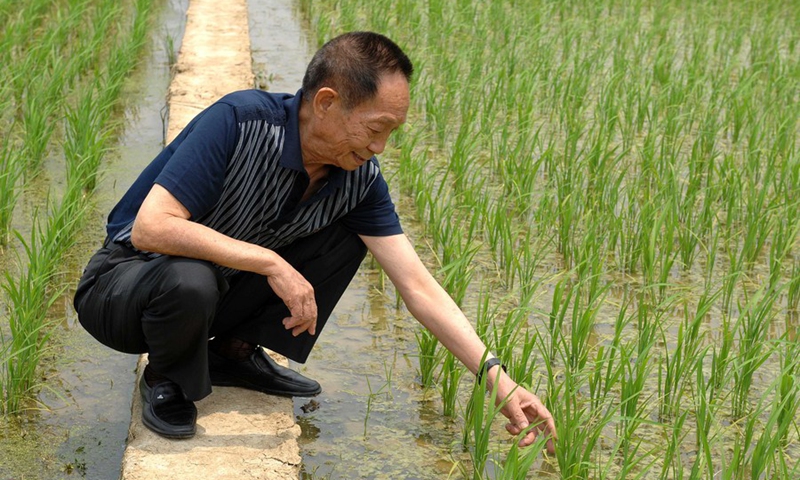 Flowers are seen in front of a statue of Yuan Longping in Southwest University in southwest China’s Chongqing, May 22, 2021.(Photo: Xinhua)

Researchers and politicians in several South Asian countries have been mourning the death on Saturday of Chinese scientist Yuan Longping, whose lifelong research in high-yield rice varieties help feed people around the world.

Amrit Prasad Poudel, a Nepali researcher involved in developing new varieties of rice, had directly observed the dedication of Yuan Longping, known as “the father of hybrid rice,” to the research on hybrid rice technology.

Poudel was at the headquarters of Yuan Longping High-tech Agriculture Co., Ltd, a China-Based company, in 2018 for a two-week training, but Yuan did not attend the inauguration ceremony of the training program organized for Nepali agricultural scientists.

Yuan made an appearance for the training program on the third day, apologizing for his absence on the inaugural day, Poudel recalled.

“In fact, he failed to attend the training program on the inaugural day as he was busy in the paddy field selecting seeds,” said Poudel, an agronomist from the Nepal Agricultural Research Council (NARC) under the Ministry of Agriculture and Livestock Development.

“It was a perfect example of how dedicated he was to research in the paddy field.”

For the training program, Yuan made a 25-minute speech about the importance of hybrid rice in increasing the productivity of rice and in feeding the growing population in the world, Poudel said.

“During a tea break, I could meet him personally and I was deeply impressed by his simplicity despite him being a world-renowned agro scientist.”

Poudel was sent to China for training under a three-year agricultural technical cooperation project that started in 2016 between the two countries. Under the project, the Chinese government helped Nepal promote the adoption of hybrid rice varieties and conduct technical demonstration and training on post-harvest processing technology, and farm machinery operation and maintenance technology, while Yuan Longping High-tech Agriculture Co., Ltd was chosen to work with the NARC to this end.

“About 45 hybrid rice varieties developed by the Chinese company were tested. Of them, three have been registered with the concerned authorities and have got approval to sell in the market,” said Poudel. “They were registered after they proved to be fit for Nepal’s climatic condition.”

Ram Chandra Adhikari, director for planning and coordination at NARC, met with Yuan in 2016 during a week-long training program in Changsha, the capital of China’s Hunan Province.

Adhikari, too, was impressed with Yuan being “a simple person despite his fame.”

According to officials and scientists at NARC, Yuan was a “huge” inspiration for them in their efforts to develop and promote hybrid rice in the country.

“Due to his inspiration, we are currently working to develop and promote hybrid rice in coordination with the International Rice Research Institute based in the Philippines,” said Adhikari. “His contribution to the world is also great as the technology developed by him has helped feed the world, thereby reducing the chance of conflict over food.”

Yuan succeeded in cultivating the world’s first high-yield hybrid rice strain in 1973, which was later grown on a large scale in China and other countries and regions to substantially raise output.

Yuan had devoted his life to the research and development of hybrid rice, which helped not only China but also many other countries and regions including Bangladesh feed billions of their people.

“His theory and hybrid seeds had given us the Green Revolution dreamt by our Bangladeshi founding father Bangabandhu Sheikh Mujibur Rahman.”

He believes that developing and strengthening Yuan’s hybrid rice research such as saline water-tolerant rice strains can significantly contribute to ensuring food security in Bangladesh.

So far, he said, 160 Chinese varieties of rice are registered in Bangladesh, with an annual acreage of 900,000 acres.

Yuan’s passing is not only sad news to the Chinese people, but also a great loss to humanity, said Shahzad Ali Malik, CEO of Guard Agriculture Research and Services Co., Ltd in Pakistan.

Speaking of his first meeting with Yuan in 1998, Malik said the scientist had told him “businessmen usually wish for a speedier benefit through their investment, yet seed-breeding is not an industry with quick profit, there may even be no profit.”

The talks showcase Yuan’s high hopes of serious interest in rice-breeding from a potential partner, he noted.

Later on, the two sides have undergone two decades of cooperation in developing hybrid strains, and Pakistan’s rice planting has ushered in an era of great economic and social benefits, helping many in the rural area to shake off poverty, according to Malik.