Water resources and climate change specialist Dr Ainun Nishat, Professor Emeritus at the Centre for Climate Change and Environmental Research at BRAC University, talks to Shuprova Tasneem of The Daily Star about the far-reaching impacts of climate change and environmental destruction in Bangladesh and what steps need to be taken to deal with the climate emergency. […]

Prime Minister Narendra Modi on Tuesday alleged that false narratives were being created around his government’s farm laws, the Citizenship Amendment Act and other legislations to create political instability in the country. While speaking at an event to mark the Bharatiya Janata Party’s 41st foundation day, Modi claimed that “deliberate politics and a very big […]

Reiterating his support for farmers and arhtiyas, Punjab chief minister Captain Amarinder Singh on Monday accused the BJP-led central government of encroaching upon the rights of states to dominate them, while criticising it for imposing the three farm laws and direct benefit transfer (DBT) on the state’s farming community. States never faced such problems earlier, […]

Environment laws and courts exist, but no cases

Delayed investigations, absent witnesses Cases lie unresolved for years at the Dhaka environmental court. For example, around 17 years ago, on 24 July 2004, the police had arrested two persons in possession of contraband polythene. Two years after the cases was filed, charges were finally framed against these two persons, Md Shahin and Asadul. Not […]

Bhubaneswar: Over a hundred days have passed since farmers from every corner of India came together protesting against the new Farm Laws introduced by the Government. With stern belief among the protesters that the new laws would only cause serious damages to the Indian farms and their farmers, the protest still continues. Apparently, the current […] 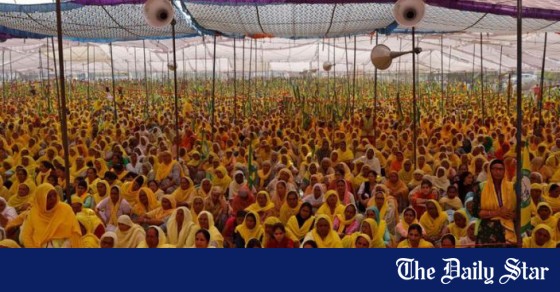 Thousands of women joined protests by farmers on the outskirts of Delhi on Monday to mark International Women’s Day, demanding the scrapping of new laws that open up agriculture produce markets to private buyers. Since December, many farmers accompanied by their families have camped at three sites on the outskirts of the Indian capital to […]

While Centre-Farmer Talks Stall, UK Parliament to Hold Debate on Laws and Protests

Jalandhar: Even as the protest against the three contentious agriculture laws continues at Delhi’s borders, the British parliament is all set to hold a debate on the farmers’ protest on March 8. The UK parliament’s debate on the ongoing protest has come at a time when the Modi government has been casting aspersions on any […]

NEW DELHI – Ram Phal grew up watching his village in north India transform as high yielding varieties of wheat and rice brought bumper harvests and prosperity to the countryside. It was called India’s “Green Revolution.”    Villages like Daryapur were part of India’s Green Revolution that decades ago made them prosperous but farmers face […]

New Delhi: Prime Minister Narendra Modi has reiterated the importance of agricultural reforms to better the income of farmers and pitched for setting up more farmer producer organisations (FPOs) across the country to help small and marginal farmers aggregate the produce with the help of better access to technology, input, finance and market. “We have […]

After taking out a tractor rally in his constituency in solidarity with agitating farmers, Congress leader Rahul Gandhi on Monday hit out at the BJP-led NDA government and said agriculture is the only business that belongs to “Bharat Mata” and urged the people to “force” the government to take back the three farm laws. The […]