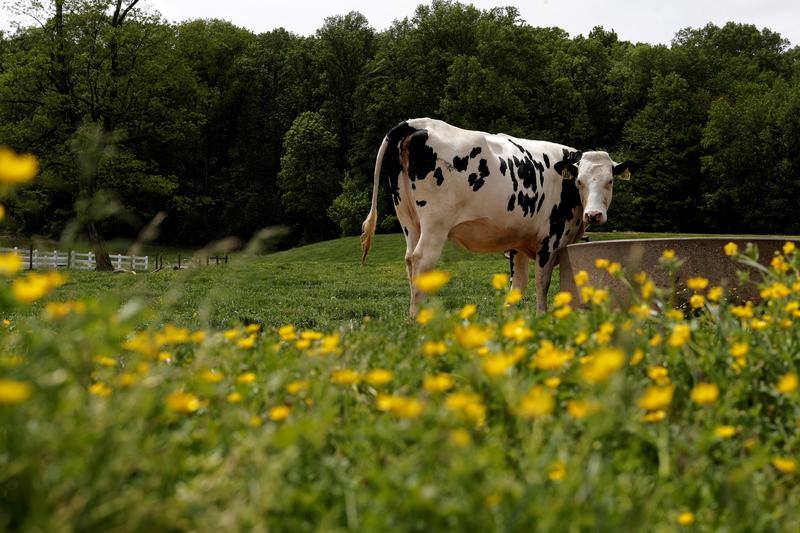 (Reuters) – Scientists have worked for years to reduce methane emissions from cattle burps by changing what cattle eat, or through research on vaccines, genetic modification of cattle and even forehead-mounted masks and backpacks to trap vapors.

WHAT IS THE PROBLEM?

Methane, the second-most abundant greenhouse gas from human-related activities after carbon dioxide, accounts for 20% of global emissions, according to the Global Methane Initiative.

Livestock emissions come from feed production and processing (45%), burps and flatulence (39%), manure storage and processing (10%) and processing and transportation of animal products (the rest), according to the United Nations Food and Agriculture Organization (FAO).

Even so, greenhouse gas emissions intensity per kilogram of milk declined almost 11% from 2005 to 2015 as farmers improved animal health and feed quality and better managed herds, resulting in more milk per cow, according to the FAO.

WHY ARE LIVESTOCK GASSY?

Ruminant livestock – cattle, sheep, bison, goats, deer and camels – have a stomach compartment called the rumen in which microbes produce methane as a byproduct of digesting fibrous plant material. Certain feed additives claim to inhibit these microbes from making methane.

Trials in Europe and the United States have confirmed methane reductions of 10% per animal.

DSM. The Netherlands-based nutrition and health company developed a product called Bovaer after 10 years of development. It consists of a molecule synthesized from two natural compounds. Trials have demonstrated it can consistently reduce enteric (related to the intestines) methane by 30% or more than 70% in specific conditions.

Mootral. The Swiss company developed a feed supplement based on garlic and citric extracts to reduce enteric emissions. It claims to inhibit activity of the archaea, a type of micro-organism, and reduce methane emissions by up to 38%.

Restaurant Brands International. The owner of Burger King restaurants is developing its own feed from lemongrass. Acquiring commercial-scale quantities of the plant is its biggest supply-chain issue, said Matt Banton, Restaurant Brands’ head of global innovation and sustainability.

Research continues in 2021 in the United States, Ireland, Brazil, Mexico and Austria.

Cargill Inc. The U.S. agribusiness company is developing a methane-reduction product for sale to farmers “in the near future,” said spokesman Daniel Sullivan.

Research published last year by University of Adelaide adjunct professor of animal science John Williams showed that the level of methane-producing microbes in the cow’s rumen is largely influenced by its genetic makeup. Breeding cattle to select for those with a complexity of microbes that have low methane production is a more permanent solution than adjusting feed, he said.